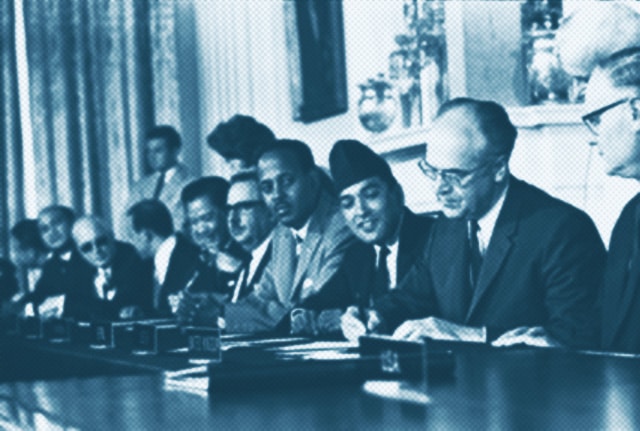 It is January 1968. You are a participant in the discussions of the United Nations’ Eighteen Nation Committee on Disarmament, the most important UN committee with respects to nuclear weapons treaties. You have assembled at the UN building in New York City, to work on a proposed Treaty on Non-Proliferation of Nuclear Weapons (abbreviated as the NPT).

The NPT Simulation is a classroom simulation developed by Professor Alex Wellerstein (this is revision 5, 2018) at the Stevens Institute of Technology. It allows students to act as delegates to the United Nations in 1968 to discuss what requirements the Nuclear Non-Proliferation Treaty would have, and then to decide whether or not their nation would sign the resulting treaty. The “default” version here is set up for 9 groups of students (usually 2-3 students each), and to take about 1.5 hours to run in total. It can be modified by reducing the number of countries involved. There is a “point system” that measures how well any given country achieved its aims, with “trade agreements” as a way for countries to have some bargaining power. The aims are delivered through secret communications to the delegates from their “heads of state.”

The core lessons, aside from the diplomatic issues of the Cold War, are about the nature of diplomatic negotiation (for example, that considerable bargaining takes place in informal settings), the ways in which negotiations are often forced by national priorities, and it forces students to figure out who is likely to be an ally and who is not, and to manage the fact that there is no “perfect” solution to multi-party negotiations where the parties have different priorities and goals. The students also typically enjoy that deception is part of the exercise.

The actual treaty negotiation has been simplified (as has the number of countries and their roles) but is essentially based on the issues and national positions discussed in Mohamed Shaker’s The Nuclear Non-Proliferation Treaty: Origins and Implementation, 1959-1979.

The ZIP file contains the materials used in the simulation (not all are mandatory, some are simply to make things easier, like large “name cards” for each country so the students always know who they are talking to), and several files for the educator (including a Powerpoint presentation that is used to structure the actual simulation, and an Excel file that allows for rapid calculation of points). Everything is modifiable and adaptable (though with some difficulty).

No posts were found.

Copyright 2019 Dan Esposito,  NRICHED, All Rights Reserved
Interested in joining or staying in touch?Get notified when we open the beta up to the public.